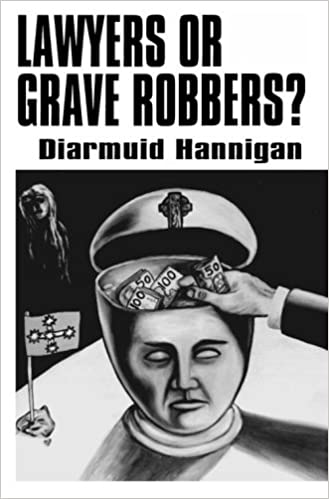 I do have a limit number of printed copies available that I can send direct. If you would like to purchase one for $30.00 you can contact me directly at my email address. charada@thecommunitycollaborators.com

The reasons to purchase this book are to protect your family`s future it can be the best investment you have ever made.

Looting estates by using wills, trusts or guardianships to divert assets in a manner contrary to the known wishes of a decedent or disabled/incapacitated person is a growing trend. Cases occur in the U.S. and throughout the developed world. Australian businessman Diarmuid Hannigan wrote Lawyers or Grave Robbers? about an estate dispute created by the lawyer/executor of his mother’s estate. In the last years of her life, Elizabeth Moira Hannigan engaged a lawyer to prepare a will ensuring that her four children would receive equal shares of her estate. A clause was inserted providing an option for the share of Diarmuid, her oldest son, to be held in trust should certain financial issues exist with his export business. Mrs. Hannigan, both with advanced age and significant health problems, was unaware that circumstances which prompted her concern were long ago resolved thus rendering the clause unnecessary. Upon Mrs. Hannigan’s death, her children/beneficiaries unanimously requested the equal and timely distribution of shares as per their mother’s wishes, but the lawyer/executor advised that Diarmuid’s share would be withheld as per discretion granted him by the will. By adopting a combative attitude and creating this conflict, the lawyer/executor was then able to charge the estate legal fees to “resolve” the dispute. Within a year after Mrs. Hannigan’s death, the lawyer/executor had charged the estate nearly $40,000 (AUD) and Diarmuid’s family had spent another $18,000 (AUD). In Lawyers or Grave Robbers?, the adversarial nature of today’s Australian legal system is described as coming from “a time where barbarian armies raped and pillaged communities in the name of war. It enshrined the rights of the conqueror to steal all of the accumulated wealth from peaceful and prosperous communities, including the wealth accumulated in their graves. The law of the conqueror gives license to the powerful to perpetuate this dreadful ethos on present day communities. Hence: `Lawyers or grave robbers?'” The American democratic system, including our Bill of Rights, theoretically protects American property rights, but is this reality? Many people who have spent time in the U.S. legal system would say while our system’s theory is sound, attorney/judicial abuses of power, selective enforcement of laws and subjective execution with regard to legal proceedings allows an abusively adversarial system to absolutely occupy its own spot within the American “justice” system. Diarmuid came to view his family as consumers of legal services. He began to see how “unlike most professions, the legal fraternity remains largely unaccountable and can only be judged by their peers.” He writes that “there are no standards on how they (lawyers) should treat beneficiaries of the estate. The beneficiaries, unless they hold executorship are not considered by the law to be worthy as the lawyer/executor’s clients. They have no recourse in regards to the procedures used by the lawyer/executor in the management of the estate. There is no disciplinary body available to evaluate whether or not the lawyer/executor is behaving in a combative manner in order to benefit himself by racking up fees and charges on the estate. There are no formal venues available in which to mediate these types of concerns by the beneficiaries, apart from an application to the Supreme Court. This type of application is extremely expensive and substantially reduces the values of the deceased estates as a result of the obscene legal fees.” This largely describes beneficiary/heir status here in the U.S. While mediation avenues exist, success is predicated on good faith, an attribute routinely absent from estate disputes. Reputable professions have standards of performance that include credible oversight, not a pretense of accountability emanating from “self-regulating” bodies. Most industries recognize the need for and value of consumer protection yet the legal industry resists such efforts. Diarmuid Hannigan observes “many other industries are now accountable to consumers via independent regulators and have adopted quality standards as an integral component of the day to day running practices. The community assumes that ever profession is accountable and when confronted by the lack of accountability, lack of standards and self regulation of the legal profession they quite often feel disempowered and give up in disgust.” This attitude is easily found here in the U.S. No need to travel “down under” to find cynicism or mistrust of the legal industry. Issues surrounding the estate of Elizabeth Hannigan continue today. Her family is forever changed by this experience. Though written to Australians, these words from Diarmuid Hannigan have global applicability and should be given thoughtful consideration as the transfer of wealth becomes a prominent issue within our American society: “We, the country’s inhabitants do not have access to a process which will involve us in the development of our own legal process. We are currently stuck with an adversarial system that is run by the privileged and is controlled by the legal profession. It is a system based on disputation rather than resolution. It is inefficient in so far as disputation is non productive, expensive and destructive. Resolution is productive and always allows us as a society to carry forward and go to the next step. … The passing of inheritance from one generation to the next without the interference of the legal profession upon family well being should be basic. It is obvious to anyone with an ounce of intelligence that healthy families make a healthy community that in turn creates a healthy country. Minimizing conflict in families allows us more energy to go forward and develop the positive components of our lives. We should not be subjected to a legal system that is based on the principal of rule over, we need to look at a legal system that comes from ourselves. It will mean the development of quality standards for the legal profession and those standards will need to be developed by the community as a whole with the purpose of benefiting the community rather than benefiting the financial interests of the legal profession. Lou Ann Anderson is an advocate working to create awareness regarding the Texas probate system and its surrounding culture. –www.EstateofDenial.com

Diarmuid Hannigan is a well-known Melbourne business man with awards for export achievement and innovative business practice. Born in Africa, Diarmuid shares in the dream of all who have come to this country – of a fair society that gives a fair go. Imagine his horror when everyday family matters turn into a nightmare of Privilege – yes, with a capital P. Read his story of an encounter with the Australian legal system and share his nightmare. It could happen to you. Diarmuid Hannigan – not exactly your average client – scrutinises the conduct of a self-serving lawyer who is neither fair nor reasonable. In doing so the author reveals a profession that shuns transparency and accountability then calls upon his engineering qualifications and business experience to show a better way. Now you have learned How to Purchase the book Lawyers or Grave Robbers?